Was so awesome to see everyone again and be amongst it. Pretty rad track at Hafjell. Bit of everything: jumps, tech, speed, berms and grassy turns. A good variety, I’d say.

Chris was feeling pretty good out there but a front flat in qualifying would keep him out of the finals. We were pretty devastated to come all this way for something like that to happen but he wasn’t the only one that suffered the same fate. Boo.

Chris on one of the high speed grassy bits. Nathan Hughes photo.

We came over with a young first year junior from Whistler, Jack Iles. We were excited to show him the ropes a bit, help him gain some experience and confidence at this level. He’s a talented rider and has some great potential. Jack was loving the track. He might have got a bit too excited for seeding as after getting a rerun due to a red flag, he crashed twice and seeded 17th. But come race day, he held it together for a 9th place finish. Pretty awesome considering most of the juniors in the top 10 are second year, on big teams and have quite a bit more world cup experience. Way to go Jack! 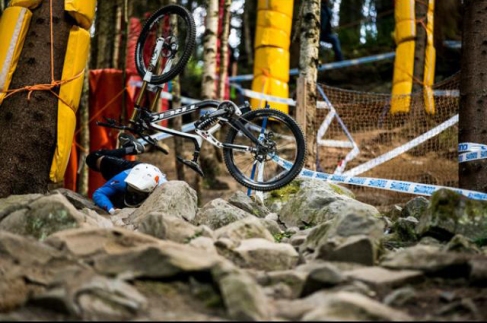 One of Jack’s crashes during junior seeding, captured by Sven Martin.

After re-breaking a few “car accident ribs” almost 2 weeks prior, I was pretty nervous to ride down the hill on the first day of practice. I set my bike up pretty soft and more forgiving and after feeling it out, I didn’t feel super fast but I was riding pretty good. I was so happy you couldn’t get the smile off my face! Definitely some lines I couldn’t commit to as it was too painful and sometimes I was gritting my teeth or holding my breath to get through sections. But I was so happy to be riding at a World Cup, just being a part of it was what I was loving. Qualifying went well, 8th surprisingly, as I had to make a pass starting in the back with plate number 32. I was eager to improve on my time come Sunday.

But the rain came. Hard. Game changer. On with the spikes and practice Sunday morning was not as bad as I thought it was going to be but I knew I wouldn’t be able to ride the way I wanted. The rock gardens and some sections were super slick and could spit you out or throw you down before you knew it. It already hurt to get pinged through the rocks in the dry. Trust me, it crossed my mind a few times to pull out. But I felt I had to fly the flag since Chris was out of the game so I toughed it out and stayed positive. The conditions got worse by race time and once I was on track, I just had to hold back and then go for it where I felt somewhat safe. I felt horrible when I crossed the finish but thats all I could do. But it was the smart thing to do as a lot of girls crashed or nearly crashed out there in those conditions. Chris and I did say from the beginning, before we left for Europe, that if at least I could make a presence at the last 2 rounds and get amongst it, that would be great 🙂

Claire before the rain storm. Photo by Laurence Crossman-Emms.

Now we are in Leogang and awaiting getting on track for the World Cup finals. Hopefully this weekend goes good for our little team!

**Sponsorship Opportunity! **
Into the Grinch trees.
Laska and I can't wait to hit the dirt this weekend! 🎉 @claire_buchar #laska #laskalife #traildog #happypup
Full throttle gets the front up through the long weekend here in BC! @chris_kovarik #fullthrottle #springiscoming #kovarikracing
Dropping into BC forests is a fave pastime!
@claire_buchar sliding through the rasta rainbow in Crested Butte! #slideways #drift #drifting #rasta #leaves #mountainbiking #girlswhoshred // 📷: @brianchapelphotography
%d bloggers like this: